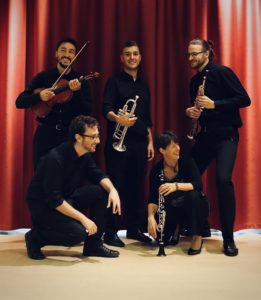 MotoContrario is therefore an ensemble with several lineups, open to plural contributions, which lead him to face repertoires ranging from the duo to the large ensemble. This flexible organic has allowed MotoContrario to take care of performances (world and italian premieres) of works by composers coming from all over the world.

The ensemble was among the winners of the “Open – Contemporary Creation 2014” competition, created as part of the 2014 edition of the Pergine Spettacolo Aperto festival. He collaborated with the Conservatory of Trento, holding seminars on contemporary instrumental techniques. He was ensemble in residence at the La Spezia Conservatory, working for workshops, seminars and concerts.