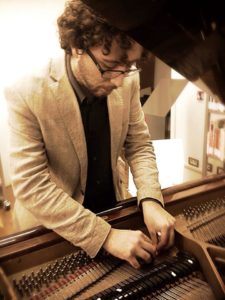 Marco Longo (*1979) is an italian pianist and composer.

His music has been broadcasted by Rai RadioTre and RadioClassica.

He earned the Composition Diploma at the Statal Conservatory in Trento, after studying with C. Galante, A. Franceschini, L. Cori, L. Polato and C. Colazzo. He has followed courses with Azio Corghi and Mauro Bonifacio in Siena (Accademia Chigiana), in Brescia (Romanini Foundation) and in Bologna (Philarmonic Academy).

He took also part in seminars and masterclass held by A. Solbiati, S. Gervasoni and N. Vassena.
He was admitted at the Schloss Solitude Summer Academy in Stuttgart, (Chaya Czernowin, Steven Takasugi and Amnon Wolman); he attended the 46th Summer Courses in Darmstadt and the 8th Impuls Academy in Graz, following especially the classes of Pierluigi Billone.

After finishing the piano studies at the Conservatory of Trento, under the guide of L. Di Paolo and S. Torri, he followed several courses and masterclasses with pianists like A. Ciccolini, A. Cohen, M. Campanella, L. Margarius and A. Kravtchenko and was awarded in some italian piano competitions like “Città del Vasto”, “Città di Monopoli” and “AMA Calabria”.

Since his youth, he focused on the chamber music repertoire, studying it with several distinguished interpreters, like G. Guarino, E. Bronzi, J. Peitz and P. Masi, and playing in ensembles from duo to quintet.
For almost ten years he has steadily collaborated with the cellist Ivo Brigadoi; they have been invited to hold concerts in Italy and abroad and also mentioned and awarded in several competitions, like in Riccione and Arezzo (I prize), in Livorno and Pistoia (II prize) and in Torino (III prize).

The duo was admitted at the International Chamber Music School of the “Trio di Trieste”, studying with D. De Rosa, R. Zanettovich, M. Jones and E. Bronzi, obtaining the Merito Diploma; has also obtained the Master Diploma of the Imola Academy, after studying with P. Masi.
Recently, he has begun to focus the pianistic activity on the nowadays music: he’s a co-founder of MotoContrario, a musical ensemble and a collective of composers and performers, born for the study and the divulgation of the contemporary repertoire.